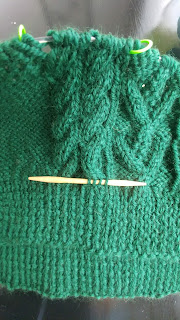 How far back would you go to fix a mistake?

Several inches past the "set up" row I had to go back and fix a mixed up cable. I put the 4 stitches on but realized I needed the 2 purl stitches on both sides - so that's 6 stitches ripped down to the base. 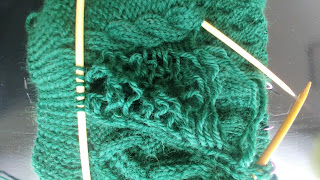 It worked! I knitted them back up. 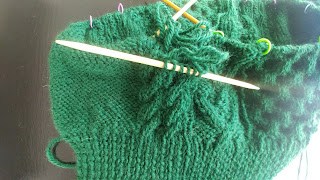 Several other times during this project I got my cables going the wrong way.  There were lots of handy tutorials on the internet. Twist Collective has good advise about fixing mistakes. 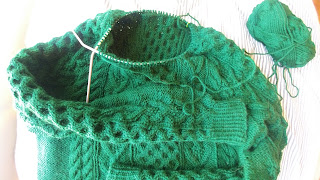 This pattern is called Bronwyn. This crazy green yarn was bought at a thrift store. If I ever see multiple skeins of one color of 100% wool in a thrift store I buy it and figure out the project later. The yarn is called Fleur Delaine by Laninter USA (made in Brazil).

Posted by fleeceloveandhappiness at 6:15 PM
Email ThisBlogThis!Share to TwitterShare to FacebookShare to Pinterest